A lot of the time, we don’t seem to understand that no response is a response and a powerful one for that matter.

When you text someone, and you get no response, you can send a follow-up, but it could be a waste of time.

When I don’t want to respond to some text messages, I think my silence speaks for itself, and it’s a powerful response that preserves self-love and shows a lack of interest. Sometimes, the best response is no response.

No response is a response

If you were texting your partner and he suddenly didn’t respond anymore, you can be sure that you have gotten a powerful response because not responding is a response.

However, of course, you shouldn’t jump to a conclusion and should check the other reasons why he isn’t responding, which I will list later on

No response to a text means that the conversation is over, at least about the topic you were talking about. You can try sending a follow-up question, but a lack of response shouldn’t surprise you.

A person who respected you would have replied in a timely fashion, but he is probably a narcissist and has read your message but doesn’t want to reply.

A lot of the time, a lack of response is actually saying so much by not saying a thing. It is telling you that the person doesn’t trust you anymore to tell you about their deepest thoughts and feelings.

They don’t want to tell you about the events in their life and are slowly distancing themselves from you.

But even though they aren’t telling you about their feelings, they are actually showing you how they feel because no response is also a response.

No response is actually a powerful response

How many times have you stared at your phone or gone on social media to see if he did finally respond?

You would expect him to answer in a timely manner, but he is such a narcissist that it’s been hours, and then hours turn into days, but there is still no answer.

You might be going to send a follow-up like ‘Did you see my last message?” but if there is still no response, you have to take care of your self-love. Be like a narcissist yourself and realize that no response is a response.

No response to a text means they just don’t want to talk to you. But there could be many reasons why they aren’t responding.

Of course, they could have been busy when they got the text and forgot about it later. But if you have sent a follow-up question and they are still not replying, then this clearly can’t be the case.

And after all, being busy isn’t an excuse because people who care for you will spend the few seconds it takes to write, ‘Sorry, I’m busy, talk to you later.’

But it could be that they simply don’t have a response. Sometimes we simply don’t know what to say, or we don’t want to have a fight over text.

Maybe your question was simply something they don’t know how to answer or don’t want to.

Of course, it might be that they know how to reply but don’t want to because they know that the answer is going to hurt your feelings.

Unfortunately, it happens that people break up by simply refusing to respond anymore.

They don’t have the guts to say that they no longer want to be with you, so they let you figure it out by yourself because no response is a response that means something.

But maybe sending a text message just isn’t the right way for them to say what they want to say, so they will call you or tell you face-to-face the next time they see you.

This is why sending a second message is a good idea, to check if this is the reason that they aren’t responding.

Do you know how on Facebook you have the ‘Ignore’ button under the name of the person who wants to be your friend?

The truth is, the ignore option is always available in real life as well, and they could be merely choosing to ignore you because they are emotionally unavailable.

However, maybe they are emotionally unavailable because they are going through something heavy like the death of a relative or friend, a divorce, the birth of a child, a major move, unemployment or a new job.

And in this case, they simply don’t have the emotional capacity they need in order to respond to you.

If you haven’t asked a question in your message, they might think that you don’t expect them to answer.

That is why it’s always a good idea that the second message you send be a question instead of a statement, to make sure that they understand that you are expecting them to answer you.

Sometimes, you are just too into someone who simply isn’t that into you. No response is a response that could mean exactly that.

We get so caught up in a person and wish for them to feel the same, so we don’t notice it at first, but the lack of interest shows later on in the lack of communication.

Even if there was a time when this person in question was investing their energy, communication, time, and money into getting to know you, something has changed, and now they are just not interested in investing anymore.

They simply don’t value you, but you need to see your value and stop obsessing over it. Not everyone is meant to like you, and that is perfectly fine.

They might be keeping you on hold until a more convenient time, and you should occupy yourself with other things if you want to be available for them later, but of course, you can let them know that you aren’t going to be someone who they can keep on standby.

Of course, if you are reaching out to a potential boyfriend, the matter in question could be simply that they are involved with someone else. He might be seeing someone else and doesn’t want to lose them by keeping the communication together between you two.

So no response is the response that he has taken and he doesn’t have time for you right now.

All in all, no response is a response that you are simply not a priority to the person you are trying to reach, whether it’s by text messages or on social media.

They are trying to tell you, ‘My silence is your answer’. And it can be tough to take because no one expects it to happen to them, even though we do it ourselves and is something that happens all the time.

When I don’t answer a text, like everyone else, I think that my silence speaks for itself and that the other person is going to get the message because no response is a response, and it has a meaning.

In the previous section, you learned what that meaning could be, but what should you do next?

As I mentioned earlier a few times, sending a second message is always a good idea because it will help you figure out why the person isn’t responding.

So try sending something like ‘Did you get my message?’ or ‘Can we talk soon?’ or even ‘Did I catch you at a wrong time?’ to find out whether the first message was ignored by accident or if you are being ignored altogether.

You should know when to stop because even though communication is important, if it’s not important to the other person to communicate with you, you aren’t going to achieve anything by constantly sending them messages.

Once you have sent two messages, if you still don’t get a reply, it’s time to move on. Maybe they will call you later on and explain why they haven’t answered, but even if they don’t, you have done all you could do.

And the ‘I was super busy’ excuse doesn’t work because no one is that busy not to reply to a message, even if it’s just saying that they are super busy and that you are going to talk later.

People who care for you will always find time for you, and you know that people who are super interested in someone tend to simply wait by the phone to hear a message beep. So if they are doing the exact opposite, they are just not that into you.

And you don’t need me to tell you that everyone keeps their phone close to them these days, so they have surely got your message, they just don’t want to reply to it.

Do you owe people a response?

Now let’s talk about when you are the one who doesn’t respond. Do you have the right to do that?

Yes, it is rude and disrespectful to the other person, but you have the right to do it, and no one can make you respond to something you don’t want to respond to.

When it comes to texting, there is often some drama involved because texts can be interpreted in different ways, and it’s not easy to say what we mean without facial expressions, tone of voice and other things that help us understand each other when we are talking face-to-face.

Don’t just avoid responding out of spite, but if somebody is saying hurtful things to you or is trying to draw you into an argument you don’t want to have, there is always the option of walking away from it by not responding.

You have no need to be in a conversation that is toxic, and your silence should speak for itself and let the other person know that.

Sometimes it doesn’t matter what the argument is about or who it is with because it’s simply not worth continuing. And you have the right to remove yourself from anything you are not comfortable with.

You don’t owe anybody anything, and by not responding, you are letting them continue saying what they need, to get it out of their system. And you are showing them with your actions instead of your words that you no longer want to be a part of that conversation.

You are respecting their wishes to text you because you are not telling them to stop, but you are also not letting them drag you into it, even though it’s okay for them to speak their mind.

Maybe you are even stopping things from getting worse because the other person might be waiting for you to add fuel to the fire.

Sometimes they just need to be the one who will have the last word, and you should let them have that pleasure if it means so much to them.

You should not completely avoid or ignore a person without ever letting them know why you don’t want to talk to them anymore, but when it comes to messages, it is perfectly fine not to reply when you don’t want to because you don’t owe people anything and you should look after yourself.

By not responding, you are sending a powerful message that cannot be ignored, and you shouldn’t use that power to hurt someone, but if they are hurting you, it is a great way to defend yourself.

Because by not responding, you are saying that you no longer want to be involved in that conversation, and the other person has no choice but to change the topic or give up on contacting you altogether. 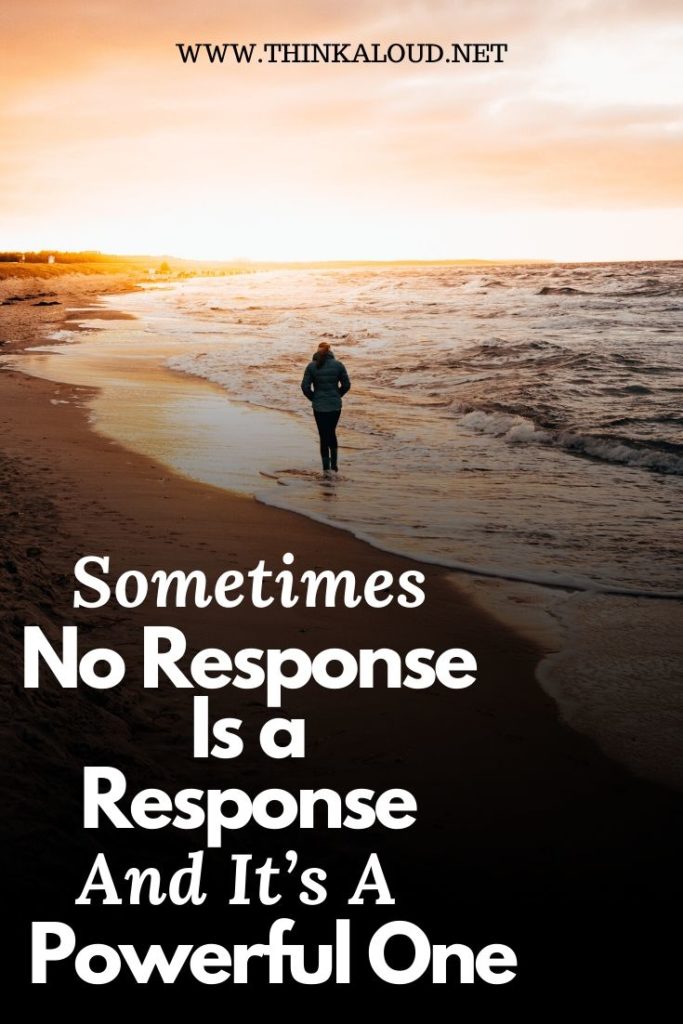