What is going on in his head when he says he needs space but still texts? Giving him space in the relationship means stopping all contact with him. When he wants space, give him what he wants.

I know how confusing this situation can be. If he wants space so badly, why does he keep texting you? The smart thing to do is notice his actions instead of listening to his words.

Most of the time, the, “I need space,” thing means one of three things; either he wants out but is afraid to admit it, or he really needs some space or the third option is that he is testing the waters, which means that he still wants to get the best out of the relationship while avoiding committing and is still able to look at other options. In my opinion, this is the worst-case scenario because it means that he isn’t a good guy.

Still, if your boyfriend is a good guy, it could mean that he actually does need space but loves you nevertheless but that means that he will tell you what he needs to figure things out and reassure you that he loves you. So, you can both decide how things should go from there.

Again, the most important thing is to look at actions, not words. If he wants space, speak with your actions, and let him have it.

He says he needs space but still texts? Completely cut him off. Stop all communication, and don’t see him. Tell him that you will respect his decision and then prove that.

If he says he needs space but still texts, he’s messing with your head, and there’s no reason for you to allow that. Giving him space in the relationship means not allowing him to enjoy any of the perks of being in that relationship.

It’s not fair if he says he needs space and then expects you to be available whenever he wants. You don’t have to take that. So when he says he needs space but still texts, tell him that things don’t work that way. Either he will have his space or he will keep texting you; doing both is too confusing so he will have to decide what he really wants.

Don’t let anyone string you along, and don’t be anyone’s backup plan. When he says he needs space but still texts, it could mean that he is keeping you as a reserve, he wants to see what else is out there but still have you waiting for him. There’s no reason why you should take that from him. You deserve to be treated so much better. So, if he can’t make up his mind, you can always decide for him.

Let’s look at all the possible explanations as to why he says he needs space but still texts. I’m sure that you’ll recognize your situation in one of these meanings and it will help you decide how to proceed, so read on.

Contents show
When he says he needs space but still texts you, here’s what it means
1. He is confused even more than you are
2. He wants to have his cake and eat it too
3. He isn’t ready for a break-up
4. He is downgrading your relationship
5. He wants to be the good guy
6. He has you as a backup plan
7. He likes you but doesn’t want to date you
8. He misses you
9. He doesn’t want to be single
10. He has problems
11. He has met someone else

When he says he needs space but still texts you, here’s what it means

1. He is confused even more than you are

Let’s not be so harsh on the guy. When he says he needs space but still texts, it might mean that he is confused and he actually has no clue what he wants.

In fact, he is so confused that it’s making you confused as well. You aren’t really sure whether he is insecure about your relationship and you or he has to figure out some stuff of his own.

2. He wants to have his cake and eat it too

It’s very likely that this is actually all about him and has nothing to do with you and your relationship. What he really wants is to have his cake and eat it too.

He wants to have you around and be able to text you when he’s lonely or bored but he also wants to enjoy the benefits of a single man’s lifestyle. He wants to date other girls, have nights with the guys, and do as he pleases without worrying about commitment. Your man wants you to stay in his life so he can have the best of both worlds.

He might not be ready to break up with you, so he’s testing the waters so he says he needs space but still texts because he isn’t ready to stop all contact with you.

It’s pretty obvious what he is doing in this case; he is slowly leaving the relationship until he feels okay with breaking up with you. It seems like he’s preparing you for it.

4. He is downgrading your relationship

When he says he needs space but still texts, you’ll start thinking that everything will be fine but don’t get your hopes up just yet. Him doing this could mean that he is trying to turn your committed relationship into a casual one. Sure, he doesn’t want to break up, but he most definitely wants less than you two have now. That will mean having fewer expectations and making the relationship suit his needs. In my opinion, you’re either in or out, so this kind of behavior is disrespectful.

5. He wants to be the good guy

This whole situation is definitely making him seem like a bad guy. He is well aware of that, and he doesn’t want to be the villain in this relationship. So, he tries to be the guy who cares about how you are. He doesn’t really want to be with you, but he feels bad about ending things.

In this case, his texts are just sympathy texts, and nothing more than that. Tell him that he can have his space, and you don’t need his texts if he isn’t committed to the relationship.

6. He has you as a backup plan

He might be keeping you as an option. The truth is, he doesn’t want to be with you right now but wants to keep you available for the future.

He’s in the mood to act like a single guy again but he knows that it might not work out for him the way he would want it to. So, he keeps the window open so he can climb back into your life if he gets bored or lonely. Don’t let anyone treat you like a second option; you deserve to be your man’s first choice.

7. He likes you but doesn’t want to date you

This is just him playing with your heart, even if that isn’t his intention. In any case, he has to decide; either he wants to be with you, or he doesn’t.

Don’t get excited too soon. It’s true that he could be texting you because he misses you, but that doesn’t mean that he’ll come back. Check our other article to make sure whether he really misses you.

Keep in mind that even if he does miss you, he could be just looking to chat. He wants to feel like you’re still in his life but doesn’t really want to make you an important part of it again.

I know that you’ll get your hopes up when you see he misses you but avoid being too available. You’re not someone who’s just desperately waiting for him to text. You are much, much more than that.

9. He doesn’t want to be single

He actually feels perfectly fine in the situation you two are in right now. This relationship purgatory is good for him because he doesn’t want to be single or move on.

What he’s hoping for is that you will be fine with a casual, relaxed dating setup. So, if you’re not fine with that, you have to tell him right now. Otherwise, you will be stuck in a relationship that isn’t what you want, and he will one day decide that he wants even less.

So, maybe he has a lot of issues he needs to deal with that don’t concern you and your relationship. Maybe he even told you all about them, and that is the reason why he needs space.

Still, you shouldn’t be treated like this, and he should find support in your relationship. What would it be like if he was always running away when there were problems? It’s not fair to you.

11. He has met someone else

If none of the options apply to your situation, it could be this one. Maybe he has met someone else. To know for sure, read our article on how to know if he has fallen in love with someone else.

If he is keeping you as an option in case things don’t work out with the other woman, run away from this man. 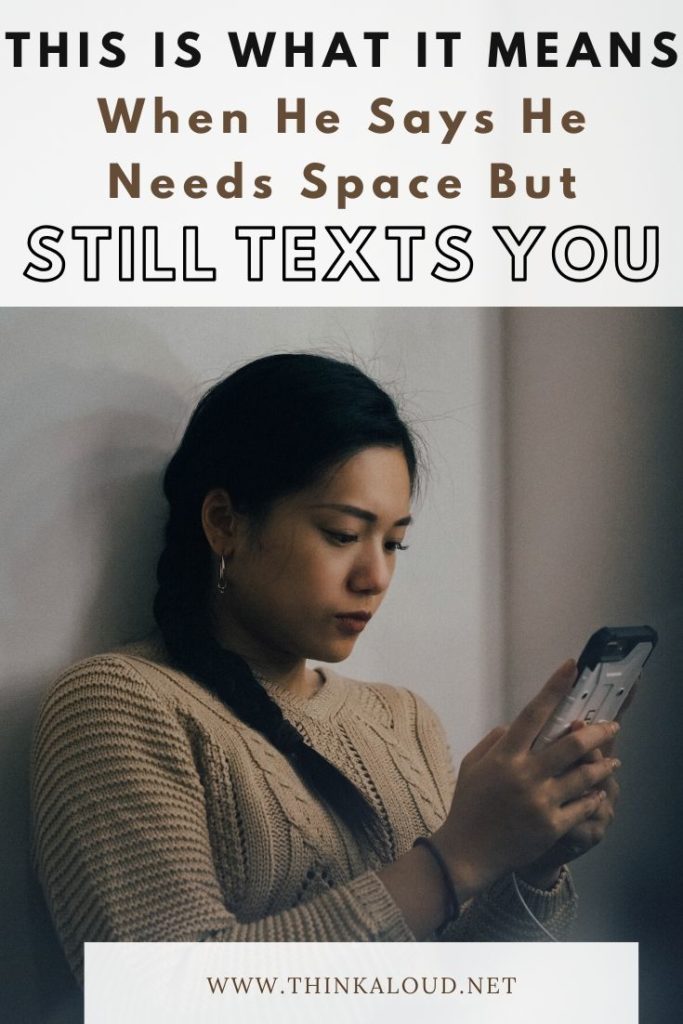