Men and women go through different stages when falling in love with someone.

Women tend to have more feelings than men and sooner, like all of a sudden, there is this cluster of emotions that swirl inside them.

Men are quite different. They have steps that they go through when falling in love with a girl.

The journey itself is also different.

A woman has intense bursts of emotions ranging from happiness to uneasiness and raising questions about whether he likes her or not.

Whether or not you are familiar with some of these steps, these are the ones that are most frequent for a man:

The reality is that despite everything that’s said, a man gives high priority to how a woman looks, so her physical appearance is something he will notice first.

The sheer beauty and grace that a woman radiates are of vital importance to men. They are shallow creatures.

I know this is hard to hear, but if a man told you the first time that he met you that he liked you for your personality, believe me, he was lying.

In the beginning stages, men are only attracted to a woman’s physical appearance, what she wears, and so on.

Women are quite different. After the first conversation, a woman may like a guy for more than just his looks. However, don’t get me wrong.

You need to know that that’s just the way the cookie crumbles.

It’s not about the whole package at first, but rather that he likes something very specific about you physically that seems to please his mind.

2. He is mesmerized by you

Nowadays, a man likes to capture a woman’s attention. He will do almost anything to get you to notice him, no matter where you are.

In all honesty, sometimes he will not succeed but the fact that he attempts to get your attention means that he likes you physically.

After he is sure he has your attention, he will start to become obsessed with you.

Now, remember; a man could like several women, but he is rarely mesmerized by all of them, as that doesn’t happen a lot.

He will try to court you in different ways, but if you reject him, then he will just move on to the next girl, as that’s easy for him.

3. He finds you attractive

If you give him the slightest hint that you like him too, a man will recognize his chance and you will start to attract him in a more serious manner.

At this stage, a man is comfortable walking away from everything, without fear of his heart being broken.

You should be aware of this, since he hasn’t invested any of his feelings yet, and maybe he just wants to sleep with you.

If he likes you, and if he thinks that you could fulfill his wishes, he will get to work and do everything for you to fall for him first.

4. He wants to impress you

This stage is quite interesting. While a woman at this point actually tends to fall in love with the guy, men are different and not even close to it.

At this stage, he only wants to make an impression on you by doing various things like planning a date or buying you flowers or gifts.

It’s hard to hear, but sometimes a woman tends to just give in to the guy at this point.

5. He starts to raise questions

If he has gotten to this stage without too much trouble, then he will start to raise questions with himself.

However, he still may not be in love with you and yet will continue to do everything for you to fall in love with him. I know, it’s a complicated situation.

When he succeeds in his attempt for you to confess your love for him, then he will be a happy man and excited for the direction that this relationship is going.

However, all this time he was focused on you loving him, he forgot to question himself about whether or not he wants to be in a relationship with you.

After he is sure that you love him, then he will eventually consider whether he will step into a relationship with you, knowing that you are already madly in love with him.

It might seem selfish, but it’s actually part of his nature and even at this stage, he may be ready to dismiss you.

This is a hard truth but it’s a fact, as the girl needs to be perfect in his eyes.

I know that you will have decided to be with him much earlier than him, but just wait a short time and you will get to the last stage.

The fact that a man needs to seduce a woman first so that she falls in love with him at the beginning is really unfair and that’s why women do not have the patience to deal with men sometimes.

If the guy that you like decided to give it a try with you, by this stage, he is ready for it. The next couple of months will seem like a dream to you.

He will take care of you and start showing his emotions.

There is a little trick you can do to make his head spin. Don’t fall for his emotions. Don’t tell him that you love him when he wants you to.

Be hard to get and make him earn your affection, so when he succeeds, then both of you can enjoy the fruits of his labor. 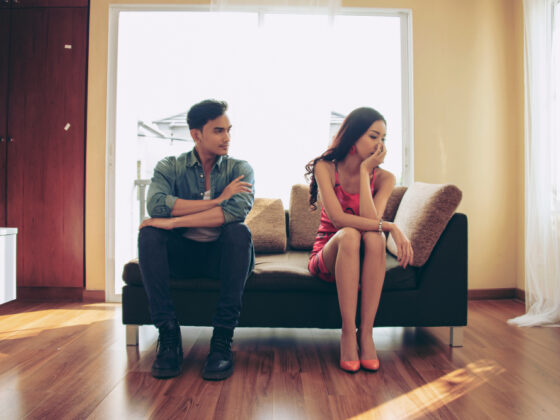 When Is The Right Time To End A Relationship?

10 Telltale Signs You Are Losing Yourself In A Relationship