Narcissists are people who only care about their own needs but I guess you already know that since you think that your ex is one of those people. All in all, a narcissist is a person who could never love you the way you deserve to be loved. I am telling you that because you need to realize that it’s good the two of you broke it off. To find out about the painful clues that prove your ex is a narcissist, keep reading.

1. He always talked about himself

2. He would never compromise

3. He controlled and manipulated you

You felt like a puppet on a string when you were with him and I am sure that he enjoyed pulling your strings. Narcissists are ready to manipulate you to get what they want. He always knew exactly what to tell you to get you to do what he wanted.

4. He never respected the rules

He was above all the rules. Someone like that thinks that he can get away with just about anything. Of course, he had rules for you, but none of the rules applied to him. He considers himself to be someone who is above it all and knows best.

5. He cared about what others thought of him

Narcissists care about their reputation so if your ex cared a lot about what others thought of him, he is probably a narcissist. He was ready to lie and cheat just so people would think of him as an amazing person. It didn’t matter who he hurt, as long as it made him look good.

6. He would always blame you

It was never his fault, and he would always find a way to place the blame on you. This type of guy can never take responsibility for his actions. Everything was always your fault, no matter how many mistakes he actually made. When he wasn’t blaming you, he was blaming others.

7. He always thought that he was entitled

Why would he have to work hard for things when he deserves them because of who he is? That is the way a narcissist thinks. He considers himself to be entitled, and that pompous attitude usually gets him what he wants, which only encourages him to keep thinking that he doesn’t have to work for things.

8. He thought that he was better than everyone else

These kinds of people always think a little too highly of themselves. He thinks he’s the best, and while everyone should love themselves, he loves himself too much. It gets to the point where he thinks that he is better than everyone else, and that is a bad attitude. It makes him look down on others, which is a terrible thing to do.

9. He was an energy vampire

When you have a conversation with a narcissist, you will feel like you are drained of your positivity. He would take all your positivity to fuel himself and turn you negative. That is what energy vampires do, and if he is one of them, he is most likely a narcissist.

Since he cares a lot about what others think, when you were in a group, he would be charismatic and charming but afterward, when you got home and closed the door, his personality would change. Narcissists are often two-faced, since they like manipulating so much.

The interesting thing about narcissists is that they are overly sensitive to any criticism. He would have no problem with telling you what you should change about yourself… but when it came to him, he considered himself to be perfect, so there never was anything he had to change. He would never listen to you when you told him what he needed to change about himself.

12. He would always have excuses for his behavior

These people are masters of making up excuses so he would always have an excuse for why he didn’t show up on time. On the other hand, he would expect you to drop whatever you were doing the moment he needed your attention. This kind of man never takes no for an answer.

13. He would make everything hard

Wherever he was, there was drama and nothing was easy or simple with this man. Instead, you would always end up feeling exhausted. It was like a cloud of negativity was following him wherever he went.

He was never able to relate when you talked to him about something that upset you. It is like he was unable to see things from your point of view. Even when you needed him the most, he would turn the conversation to the topic of him.

15. He would push you away when you got too close

These people have high walls around them and for him, this is because he thinks of vulnerability as a weakness. He learned that when he was a kid. A narcissist fears getting hurt so he will never let you get too close.

16. He was emotionally abusive

I know what it’s like when you are with an emotionally abusive person. You get used to it and you start coming up with excuses for that behavior because you want to justify it. It could even go so far as you blaming yourself for it. But there is no excuse for abusive behavior. Such a thing shouldn’t be tolerated, and you should be happy that you got away from such a jerk.

Now that you have found proof that your ex really is a narcissist, it’s time for you to move on. Still, have you asked yourself if he cares if you have moved on? Is a narcissist a person who will regret losing you and be hurt that you have moved on? Trust me, you will be able to move on anyway. I don’t even wonder about my narcissistic ex anymore. It takes time but you’ll get there. Till then, remember that you deserve better and that you will find true love. 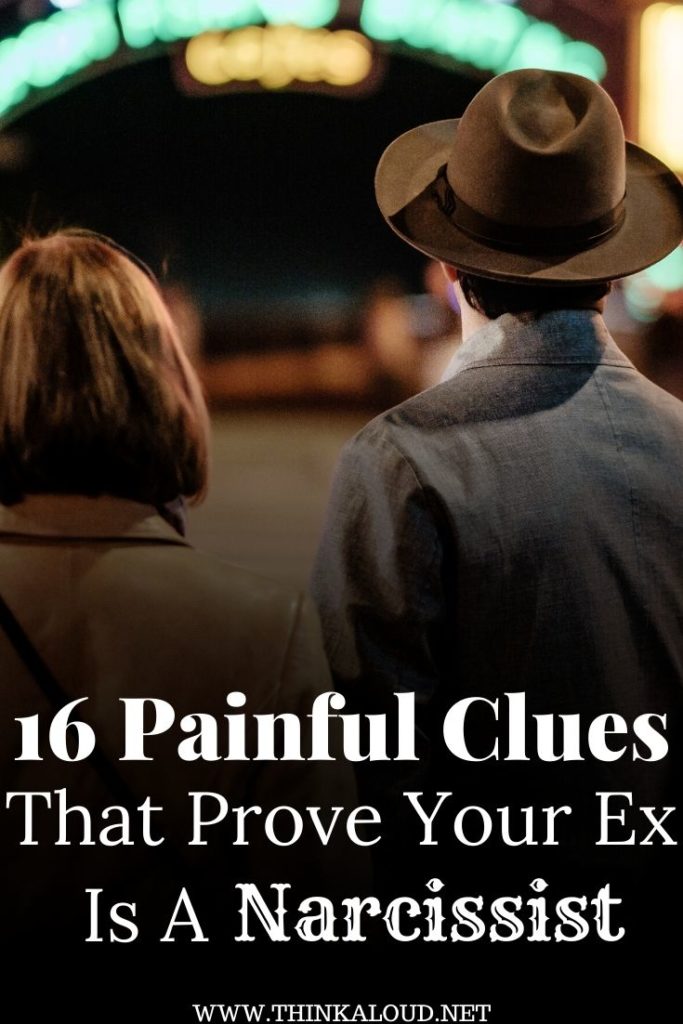