She will always go all in and put others first. She will always be understanding, and there’s more to her than what meets the eye. But she isn’t aware of it.

It’s not easy loving a girl who never believes she’s good enough because it is a battle. She will need you to be consistent, and she always questions herself. She will always feel the need to prove that she is worthy of love and deserves to be treated as a human being.

In her mind, there will always be something not right with her, and she will think less of herself. So for you to be involved with such a girl, it takes courage and responsibility.

You will have to be ready to truly love her, and by continually showering her with affection, try to convince her that she is actually a fantastic person who is a joy to be with it. You must be patient with her and understand that she needs you more than ever when she is doubting herself and letting the insecurities take over her.

She doesn’t believe in herself, so you have to believe in her and see past the insecurities. You will need to constantly reassure her that she is, in fact, good enough and deserves to be loved for who she is. Don’t be surprised when she doesn’t believe you, it takes time and effort for a person like that to see herself the way you see her.

You have to put in some effort if you want to help her. Don’t hesitate to tell her she’s beautiful every chance you get. One day she might even believe you. Be the wind beneath her wings and help her fly.

It’s not easy for you to be with her, but if she believes anything, she believes that, so you want to try not to show it. Make your goal to convince her that she is actually pretty and has a great personality. It doesn’t matter how many times you are repeating it while she says that you are lying. Consider it like a pill that you have to give her every day, three times a day, for the rest of her life, even after it finally takes effect and makes her see she’s beautiful.

Compliment her, but only when you really mean it, because she thinks you are lying to her anyway. Help her stop comparing herself to others and point out to her that those others are not as great as she thinks, and she is even better than them.

Because she thinks she’s not good enough for you, she will constantly think that you are going to leave her, so you have to prove to her repeatedly, and however you can, that you love her and are here to stay. Nobody said that loving a girl who thinks she’s not good enough will be easy. In fact, it might be the hardest type of relationship you ever had. But she is worth it. If only she would think so too.

Loving a girl who thinks she’s not good enough means comforting her at any time of day or night when she has a crisis and breaks down. It means reassuring her that you are not leaving and are there for a reason. It means that she will love you with all her heart but will try to push you away because she thinks that you are going to leave anyway because everyone else in her life did.

You need to tell her that she sounds stupid when she thinks you are going to leave her for a prettier girl, and reassure her that she is pretty. Tell her that you would give anything to make her see herself the way you see her because she is actually the prettiest girl in the world to you.

You will have to constantly prove to her that you really love her. Show her that you want to stay by giving her attention that she needs.

Because once she moves past her insecurities, she will love you like you never thought would be possible for someone to love you. And all your efforts will be worth it because she will realize what you have been doing for her and will be grateful for it.

Being with a girl who doesn’t think she is good enough is a long road, but it pays off at the end when you finally see that she has realized how great she is. Please understand that she is a delicate flower, and try to treat her like that. Don’t hurt her and stick around, give your best to help her, and you will see how she will blossom into a beautiful flower. She will finally know she is good enough, and she will put you on a pedestal for letting her finally know that. 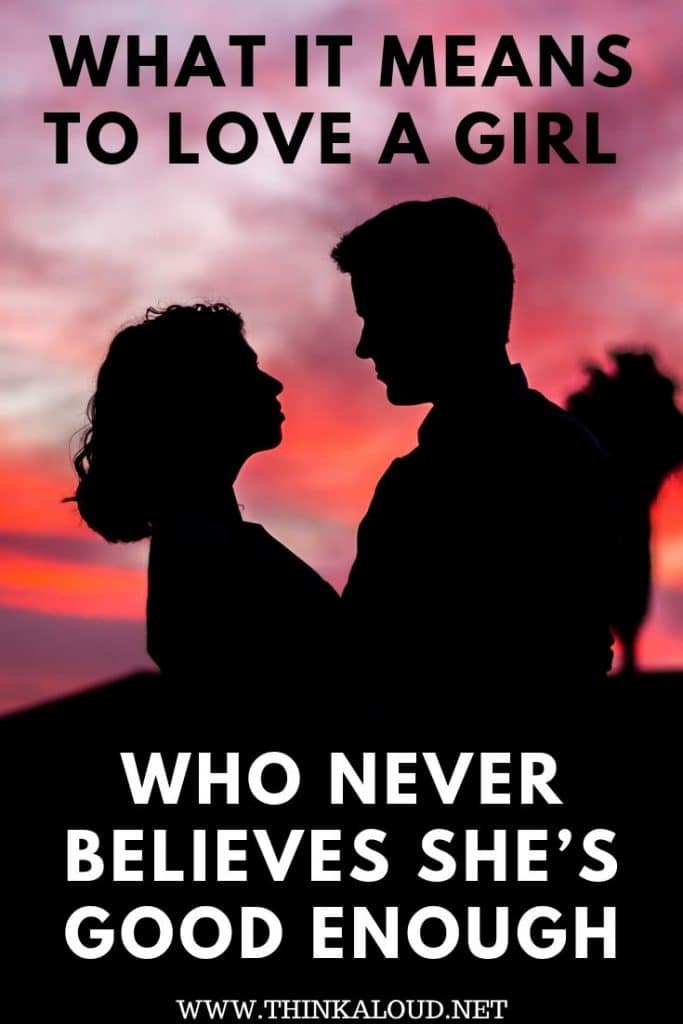 This Is Why You’re Going To Miss The Girl Who Tried Too Hard To Keep You
← Previous
Do You Have Atelophobia – The Fear Of Imperfection?
Next →
Click here to cancel reply.
2shares