A girl who is too scared to move on,

She has been hurt too many times. People were selfish and almost nobody cared about her feelings. Everybody around her hurt her at some point of her life.

Her parents never abused her, but they were never supportive either. She just felt she wasn’t important to them as she should be. She felt their love, but they weren’t there for her when she needed them the most. Her problems never seemed important enough. They just didn’t know better. She never actually had a best friend. All of her friends only used her and she knew they were hanging out with her only when they needed her. She never felt the sense of belonging to anyone.

Then he came along. She was afraid. She was actually terrified. And she refused to believe that anyone could love her for what she is. No matter how hard he tried to convince her, she couldn’t believe she matters to someone. But, he wouldn’t give up. He kept trying. And finally, he succeeded. She put her guard down and for the first time in life, she felt special. She felt that finally, someone doesn’t want anything from her, that she is loved for who she is and not for what is expected of her. Her fears almost disappeared completely. She became more open to people. She was learning how to be loved and how to love people around her. And what was more important, she was learning how to love herself. It seemed too good to be true. And eventually, it was.

After years together, he abandoned her. He cheated on her and left. The worst part for her was that he played with her trust. It took her years to trust someone, to give herself completely to someone, to open up to someone, and it was all torn apart in seconds.

Years have passed by. Everyone sees her as a happy girl, satisfied with her life, who has moved on long ago. But that is all a part of her armor shield. She doesn’t let anyone in. She doesn’t reveal her true self. After all this time, she sometimes feels even she doesn’t know who she is anymore. She plays the role of a woman without emotions for so long that she managed to fool everyone around her, including herself.

Everyone thinks she is not looking for love, everyone thinks that she is better off alone. That’s an excuse she uses for everyone around her and for herself. But, nobody knows she is actually craving for love. She needs someone to be there for her. But, who she can trust? Everyone who she ever trusted betrayed her sooner or later. She can only rely on herself.

But, she shouldn’t be scared to move on. She is stronger now. All the pain she has been through thickening her. She has to take risks in order to meet the right person. If she falls again, she will be able to stand it. She is not a little vulnerable girl anymore. Now, she knows how to deal with bad people. But, if she hadn’t been exposed to these bad people, how would she find the good ones? If she keeps living on her shelf, nobody will come along. Even if she crosses her path with that right someone, she will never know he was the one. Because she will not let him in. Her fear will scare him off.

Who is she? She is everywhere around us. She is that tough girl that you admire. And she is your friend who doesn’t allow anyone to hurt her.

She is you! Take your mask off, take your armor shield off. But don’t do it for everyone. Be careful and wise enough to know who deserves it, who deserves the real you. But, how will you know who deserves you if you don’t give anyone a chance and if you never try? 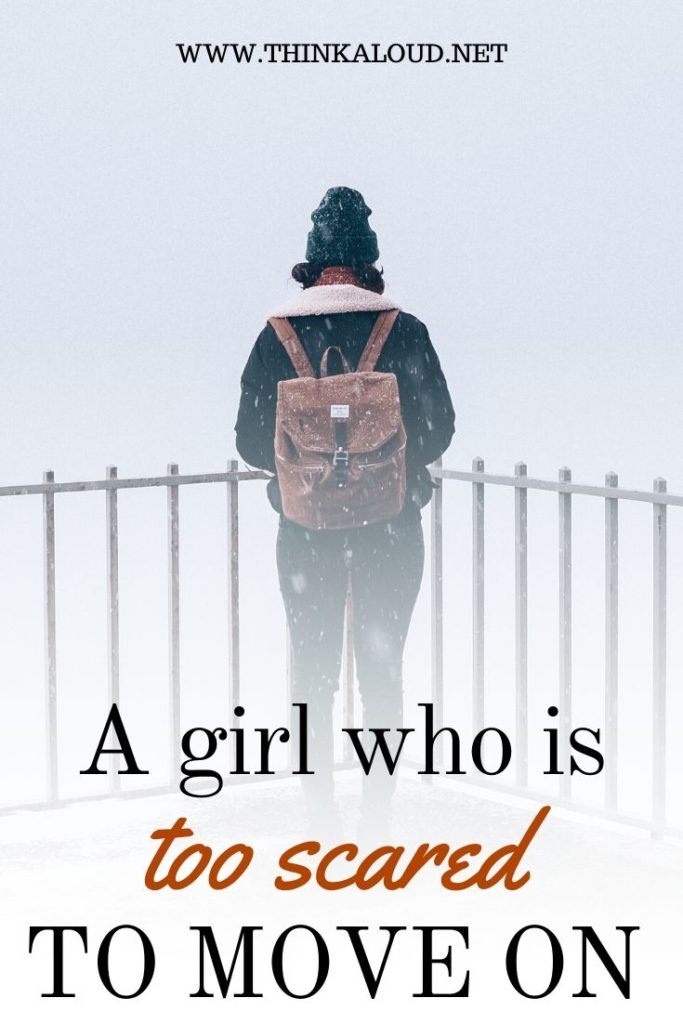