It is always difficult to face the fact that we are taken for granted by someone who is our number one priority. If you are in a relationship with a guy who takes you for granted, you probably know it deep down, but refuse to accept it and you are always finding excuses for his behaviour. But, the one thing you need to remember is- where there is will, there is a way. It’s about time you face the harsh truth and read the following 9 signs that show you he is taking you for granted.

When you are in a relationship with someone, it is perfectly normal for you to expect to be in the top of his priority list and this is how things should be in a committed relationship. But, if your boyfriend has never treated you as a priority, it is a definite sign he is taking you for granted. For him, everything and everyone will always be more important than you. Whenever you need him, he is too busy or too tired and your needs are never important for him. And when your man doesn’t act like you are his priority, it is natural for you to feel depressed and less worthy. But, when you confront him about this, he never takes responsibility and he acts like you are asking too much.

If your partner values his time but doesn’t have any appreciation for your time and obligations, he is definitely taking you for granted. This guy only calls you when it’s convenient for him and he expects for you to always make room for him, whenever he shows up. It is ok for you to cancel your plans when he needs you, but he will always blow you out just to be with his friends or to do something more interesting for him at the moment. He does this because he knows you’ll always be waiting for him to come or to call you, so he doesn’t feel the need to make actual space for you in his life.

Although this man puts you last almost always, when he’s going through some rough times or when he is facing some problems, you will be the first person he’ll call. All of a sudden, all of the people who were much more important for him than you disappear and when he is depressed or is facing some issues, you are the only one left. But, instead of appreciating this, the moment he comes back on his feet, he always goes back to his old ways. He knows you’ll always have his back and that is something he counts on. But, when you need him, he’s never around and he always lets you handle your issues on your own.

When a guy is taking you for granted, he is not interested in anything you have to say. Even when the two of you are together, he is only physically present, but he never actually pays attention to what you have to say. According to him, whatever you are talking about is rarely relevant, so there is no need for him to focus. It is simple- you are not important to him as you should be and he shows this unconsciously by his lack of interest in you. Besides, he is not interested in your hobbies, desires, dreams or fears. Even if you two have been together for ages, this guy has never put an effort to meet the real you, because he is only interested in aspects of you that serve him and not in your entire personality.

While this guy is always busy for you, he expects you’ll always be available for him. It’s the same with dates. And what is even worse, if it happens that you cannot meet him or hear him out, he has the nerve to get angry with you or to give you the silent treatment. He is either not aware of his treatment towards you and is genuinely insulted or he simply thinks he is above you and that you don’t have the right to treat him once the way he treats you all the time.

When someone is taking you for granted, this person will never match your effort for your relationship to work. You’ll always be the one to initiate dates, to book trips, to organize holidays, to plan surprises for him and to carry the burden of the entire relationship on your shoulders. And although you keep telling yourself that making your partner happy and seeing him smile is the only reward you need, it’s time to admit you would like to be with someone who at least tries to match your effort. After some time spent with someone who takes you for granted and never matches your effort, you start to feel like you are alone in this relationship and it is a feeling you don’t deserve.

It takes a lot of effort and hard work for a relationship to really work out and you’ve given your complete self for this to happen with your relationship. And although you never ask for constant gratitude, it would be nice to feel that the other person appreciates everything you have given to him. But, this guy acts completely the opposite. He doesn’t respect you as a person or anything you do for him and for your relationship and that is a clear sign he is taking you for granted. Nothing you do is good enough for him, but he never misses an opportunity to criticize you when something doesn’t suit him.

Every relationship, especially a romantic one, is a two-way street. Knowing that you also know that compromise is one of the basis of every healthy and successful relationship. But, this is not the case when it comes to your relationship with this guy. He is too selfish and never has the intention to meet you half way. And while he never sacrifices anything for this relationship to work out and wants everything to be his way, he expects you to disregard your needs and your life just to meet his needs and for you to always be the one who will sacrifice for the best interest of the relationship.

Although this is probably something you run away from, deep down, you know this guy is not afraid he’ll lose you. He simply thinks it is implied you will be by his side forever and that there is nothing he can do that would make you leave him. Even if you walked away, you know he wouldn’t chase you. So, maybe it’s time to ask yourself is this something you really need and want. 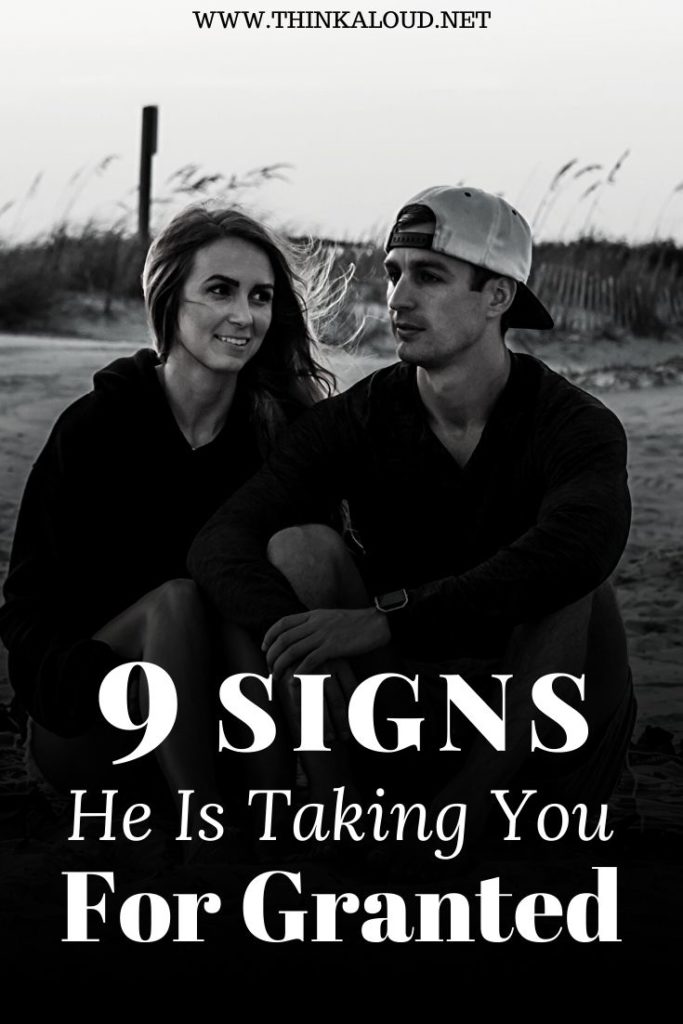