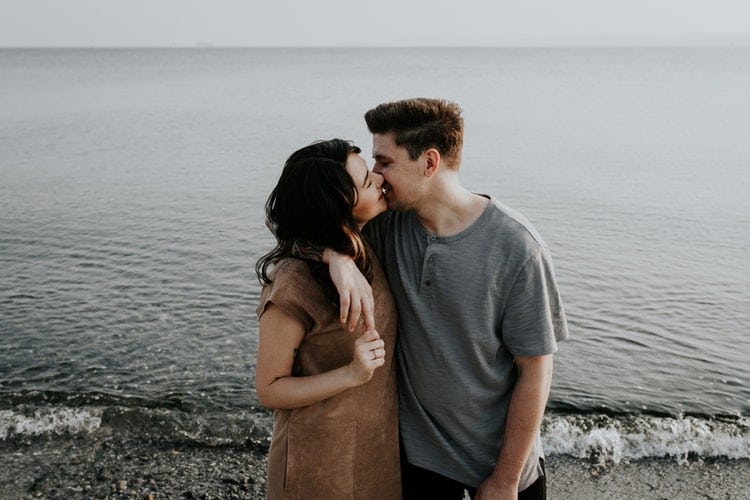 Finding your second half is one of the hardest things to achieve. At the same time, it is something we all strive for, no matter if we are male or female. Although many women don’t see it that way, the male part of the population also thinks about finding their soulmates and life partners.

It’s natural to feel scared when it comes to this notion. Finding your life partner is one of the most important decisions you will make, so you have to be very careful making it.

Men usually come to that conclusion before women do. They think that finding the right woman is way more important than it appears. Yes, most of them will probably fool around and get into unserious affairs and flings with multiple women they won’t treat like they should, but when it comes to a woman they want to spend their lives with, they will act differently. I agree—that is more than unfair, but that’s how it is and there is not much we can do about it.

Of course, love and attraction are things that move us all when it comes to romantic relationships, and without them, nothing else is possible. When men see the girl who could potentially be the one, they have to be attracted to her. But they look for different things besides physical attraction only.

When men find the right one, they don’t allow their instincts and urges to be the only things that guide them. This means that they probably won’t risking jeopardizing the relationship they have with this woman just because they liked someone else for a moment. The right man will never throw away something he and his partner worked hard to build just for a few nights of casual sex. Of course, they are different when they don’t plan on having anything serious with a girl. But when the right man finds the one, he will respect her in more than one way. He won’t cheat on her nor will he lie to her, not because he doesn’t have the urge to do it, but because he is scared he will lose her trust, or even worse, that she will walk away if he does any of these things. And she considers this woman and the relationship he has with her too precious for him to ruin it for something meaningless.

Men usually have the tendency to do their best to stay away from commitment. Most of them will make up excuses and do whatever they can just so they don’t end up in a serious relationship. As soon as they hear the word “exclusive,” most of them have the instinct to run away. But everything changes drastically as soon as they meet the right woman. A real man will push away his fears of commitment and will hold on to the woman he knows he loves. Remember, the right guy will never be scared of commitment when it comes to the right woman. Instead, he may be the first one to insist that things between them rise to another level. He simply feels that this woman is right for him, so he will do anything in his power to hold on to her. In this case, you can forget about a man being emotionally unavailable or not ready for a serious relationship. If he thinks and feels a woman is right for him, he will give himself completely to this woman and to the relationship they are having, without holding anything back.

Another misconception related to most men is that they don’t know how to express their feelings. Some of them may tell you they will be too cheesy and that they are not man enough if they talk about their emotions. I am here to tell you these are all lies and excuses. Yes, there are men (and people in general) who have trouble verbalizing their emotions, but those men are rare and they will find another way to show you their love. But, in most cases, if a guy doesn’t express his emotions towards you, it means that he doesn’t have any. When he finds the right one, a real man will be so consumed with the love he feels for her that he won’t be able to help himself and he’ll have to express it in one way or another. Yes, he’ll become romantic and cheesy from time to time. He’ll verbalize his emotions, because he’ll feel the need to tell you how important you are for him and how much he loves you. Besides this, he will use every possible opportunity to express the depth of his love in some other way. He will do it through small things—he will remember every important date and will find a way to surprise you, or he will be worried if you are sick and if you have slept well. Suddenly, this man will become creative with his words and other tokens of his love. He won’t be ashamed of publicly expressing his affection towards the woman he loves, nor will he consider himself to be less of a man for doing so.

When a right guy meets a right girl, he’ll be proud of having her. He will use every opportunity for her to feel loved and respected and he’ll want everyone around him to know it. He will proudly take her hand in public and won’t have any trouble presenting her to his friends and family. On the contrary, he’ll be more than happy to do it, because he wants everyone to know that he has this special girl by his side.

No matter how selfish a guy is by his nature, the moment he meets the right girl is the moment he forgets about his selfishness. Instead, he will do whatever it takes just to make this girl happy. At the same time, he will be proud of himself because he is the reason for her smile. The moment this man meets the right woman, he will suddenly learn how to compromise. He will put her needs even in front of his own, because he simply can’t stand seeing her unsatisfied. Whenever he notices she is unhappy about something, he considers it to be his responsibility to bring back a smile on her face. All of a sudden, all of this woman’s problems and issues will become his own. He won’t be self-centered anymore. Instead, he will allow everything that is going on in her life to consume him completely. Because he can’t be happy unless she is happy as well.

When the right guy meets the right girl, he won’t have a feeling that his freedom has been taken away from him, like he felt with every other girl. Instead, he will be the one who will initiate dates and will do everything possible to spend his time with her. Many guys avoid talking about the future of their relationships. But when they meet the right girl, everything is different. They won’t miss an opportunity to plan a future with this woman, because they know she is the right one for them and they are not ready to let her go. They don’t have second thoughts and know this is the woman they want to spend the rest of their lives with.