If you have a rich boyfriend, you’ll have heard every joke in the book. Your friends will be encouraging you to marry the guy for his money and live a life of luxury, but you know better than to think that way. You’re an independent woman, and you know you want to have a career of your own and be able to support yourself. However, you may have noticed that money is coming between you and your rich boyfriend for various reasons. Here’s what to do when you have a rich boyfriend and you’re having money problems.

Make it clear that you’re not interested in their money

This is a good thing to do for many reasons. If you have a rich boyfriend, the chances are they’ve been used before, and they may be insecure about how you really feel. By telling them you don’t care about their money, it reassures them of your intentions. However, it’s also good for yourself. It shows that you’re an independent woman who wants to take care of herself, without relying financially on anyone else. It presents you as the strong woman you are.

Set boundaries when it comes to money

If you were married, it might be different, but when you’re dating someone, it’s only fair that you keep your funds separate. That also means that your date should never be paying more for a meal than you, unless the ordered something more expensive. It means they shouldn’t be buying you that thing you’ve been saving up for when it’s not even a special occasion. These boundaries will make sure that money doesn’t come between the pair of you in the long run.

Don’t mention you have a rich boyfriend

When it comes to interacting with friends and family, you should never define your new boyfriend as rich. This comes off badly on you, and makes it seem like your interest in the man is financial rather than romantic. It also leads to them having a perception of your rich boyfriend that isn’t true to his character. He’s more than his financial status, so it’s best to leave it out of conversation if possible. If your boyfriend brings up his wealth, that’s his business, but it’s not for you to gossip about.

Just because your man has more money than most, it doesn’t mean you should be using it. For example, it would be easy to rush into buying a house together, just because you can afford it, but it’s not a step in your relationship you should take so lightly. If you’re making goals, set them in a way that any partnership would, and make them realistic for the stage you’re at together. This could mean going on your first weekend trip together, or attending a family party as a couple. Both are important milestones in your life that don’t require an unnecessary dip into the money pot.

There’s more to life than expensive cars and fine dining every night. You don’t have to spend your rich boyfriend’s money to have a good time together. Have movie nights in, order cheap takeout, and opt for a pamper evening rather than going to that expensive spa in town. You’ll discover that the things that make you happy are often the things that don’t need money. While it can be nice to splash out occasionally, money can’t buy you happiness. Keep that in mind as you enjoy time with your new squeeze. 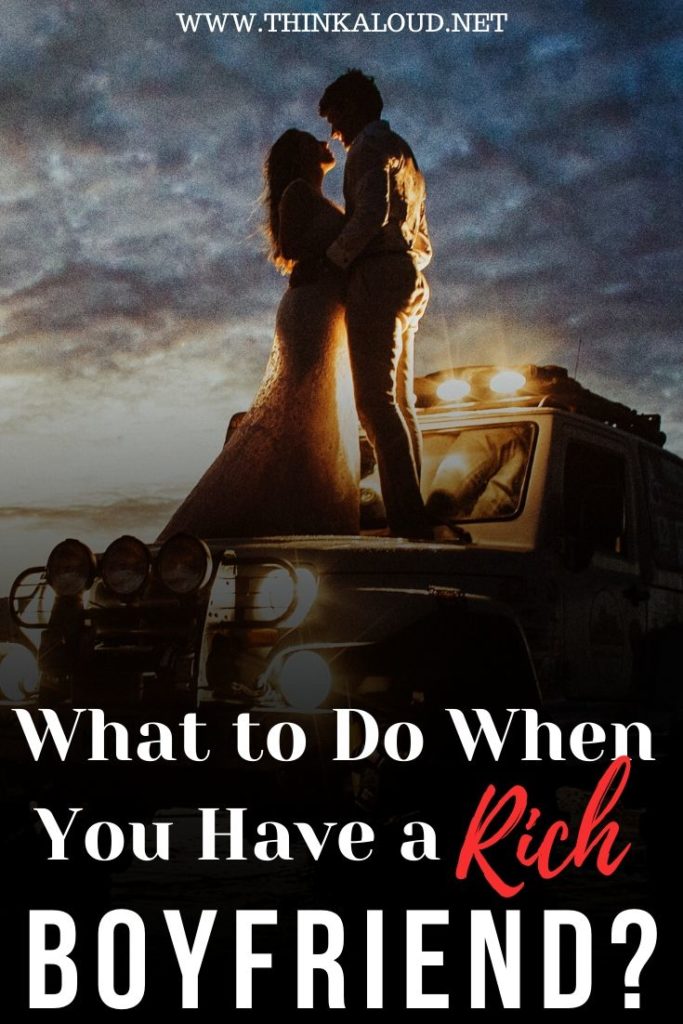