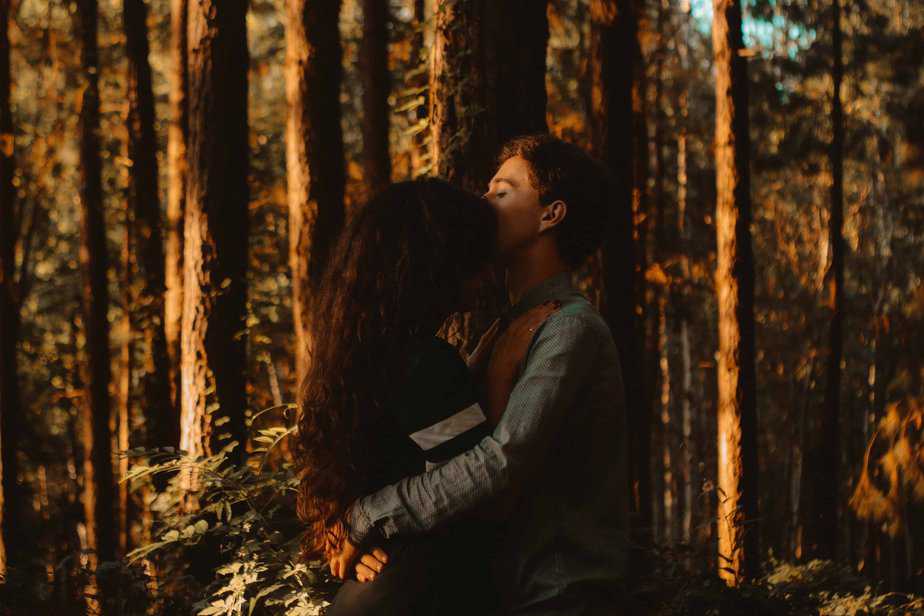 Men also have feelings, and those feelings can be broken. Actually, men can be emotionally broken too in more ways than one. Sometimes, a death in the family might catch it. Sometimes, it might be to do with a broken heart. Men get hurt just as often as women, but because of the way our twisted society works, a man is unable to express himself.

Society tells men to hide their feelings and mask their emotions all in the name of ‘protecting’ their masculinity. It is seen as weakness if a man cries, whereas, for a woman, it’s seen as a positive release of pent up emotion. When a man tries to talk about the way he feels, other men reject them, opting instead to keep quiet. Then those men that do have the courage to open up are seen as ‘unmanly’ or dubbed as homosexual. While neither of these things are bad stereotypes, they shouldn’t be used against someone, especially when they’re trying to get something across.

The emotionally broken man doesn’t register problems in his life

It is not unusual that a broken man not even views problems as problems. When something bad happens to them, they don’t tend to blink an eye anymore because it’s just loading on top of all of their other pent up emotions. Though it’s possible they’re still feeling the weight of the bad things, they never acknowledge it or tell anyone else about it.

Through their life they were going through some of the toughest and horrible times, testing their patience and their ability to hold it all in. Whenever problems or issues arise, they act like it is nothing, and they don’t freak out when some bad news comes.

They don’t like to admit that they have problems, and they will not speak up about it at all. It’s not that they condone their own self-destructive behaviour – it’s just that they don’t know how else to process their feelings. You might notice as their partner that the emotionally broken man you’re dating gets quieter when something goes wrong, but other than that, he just keeps everything hidden inside.

Often, an emotionally broken man’s way of deflecting the spotlight is to bring someone else into the matter. Rather than focussing on what he’s feeling, he’ll start to ask about your issues and troubles. Though it’s kind of him to take an interest in your life and how you’re feeling, it’s also a clever tactic that works to his benefit.

This all means that the emotionally broken man loves differently. He chooses to love someone else and not himself, so he ends up neglecting his own needs in favour of everyone else It can be tempting to try and change him right away, but nothing is fixed overnight. Pushing him too far might push him away, so you need to approach the situation slowly and with great care. Just give your man some time and get ready for when he opens up. By time he wants to talk, you can be prepared and know exactly how to advise him.

An emotionally broken man doesn’t always seem sad and disgruntled on the outside. In fact, he might be really good at putting on a show and telling the world through his actions that everything is A-Okay. He thinks he knows in his head what he really wants, though he neglects to factor in that actually – more than anything – he wants to find happiness. Because of this, he often actively seeks things that aren’t good for him.

He always seems like he knows what he wants, and he seems to have everything together. Maybe it is on the outside, but on the inside, he is fighting himself. Even if he is showing that he has everything figured out, the reality is something else.

When it comes to the emotionally broken man dating someone, it is clear they don’t want their partner to be involved. One of the most important parts of a relationship is trust, but ever since he’s been broken, trust isn’t something he understands. That’s why he can’t reveal his true feelings to anyone, let alone someone he’s desperate not to scare away. What he doesn’t grasp is that as his partner, you’re there to help him, not to hinder him.

He is not sure about some things, but he is not going to share it with his partner or with anyone else. The emotionally broken man will show that he is fulfilled and complete, but the truth is that he is broken, and he doesn’t know how to put himself back together.

A way to encourage your partner to open up is often to share a feeling too. Or, if you think something in particular is bothering him, talk to him about your feelings on the matter. By engaging him in a conversation on the topic, he might be inclined to join in and tell his side of the story. Prompting him by asking what he thinks might help if he’s still a little bit reluctant to talk.

He can be cold.

When a man is keeping everything inside, it’s difficult for him to remain completely stoic. If you push him too far or his emotions get the better of him, he might become rude and try to reject you. This is almost like a defence mechanism, and it may seem completely out of character. He’s not a bad guy – he just doesn’t know how to relay his feelings to another person, and sometimes his attempts to reach out translate badly.

The emotionally broken man sometimes needs time and space just to work things within himself. Though you might recognise that he could use some help, he would never accept that from anyone. So maybe when this time comes, he will most likely become cold and distant for a time. Even when the smallest issue comes he will be angry at the way he’s feeling and unable to communicate. At this point, it’s best to steer clear for a while. Let him get his head together and then talk it over when he’s out of his bad mood

His guard is up way too much.

An emotionally broken man puts up a million walls to keep people out, probably because the last person he let in hurt him too badly. He is trying to protect himself, and the only way he can see to do that is to keep everything cooped up.

Actually, he just doesn’t want to be hurt again. And he is ready to do everything in his power to keep himself from going back in his past and that pain he was going through. He wants to say all the things that he has on his mind, but he has a hard time embracing his emotional side. If your man is like this, be patient, because time heals everything. Though it may seem hopeless, know that he does it for your protection, in some ways. He doesn’t want to weigh you down with his problems, even if it means her suffers alone. Be there for him when he needs you, because he’ll come around eventually and give up on his whole ‘I’m totally fine’ act. When he does, it will have been worth the wait.

There is no doubt that when a man has trust issues that is often because he is emotionally broken. It’s a vicious cycle. The more people hurt him, the more he withdraws, and it means that sometimes, your romance can suffer. He won’t always believe you when you tell him where you’re going or what you’re doing. He might become clingy, or push you further away in an attempt to show that he doesn’t need anybody. You need to be patient with this man, and you need to try to build that trust back up so that you can live happily together. Once you have his trust, everything else will be easy, and you will feel like an ordinary couple for once.

The emotionally broken man doesn’t really know what is it like to be loved. Though they might have experienced it before, a bad experience has warped everything they know. If they have been emotionally abused, they expect that everyone is going to treat them the same way. This might make them reluctant to start a relationship in the first place. However, if they have actually committed to somebody, it shouldn’t be expected that they will have the same ideas of romance and commitment in their head.

A broken man creates a bad version of love in their mind, and it is really hard to convince them that actually, real love is precious and sweet and exciting. All they know of love is lies and deceit and broken trust. For that reason, you need to change his expectations to fit your own. You need to be patient, and try to not get hurt if a broken man doesn’t respond to you with the same kind of love right away. With time he will understand what real love looks like and you can show him through your own actions the way that it should always be.

When an emotionally broken man decides that he’s not good enough, there’s no turning back for some time. He will think he’s worthless, made to believe this by the ghosts of his past. He won’t believe he deserves to love you give him, and he might try to sabotage the relationship to save you the pain of being with him. He sees giving his love to someone as a punishment for them because he doesn’t believe his own self worth.

You need to understand this way of thinking because he was abused for a long time. It’s nothing personal to you – he just can’t grasp the idea that someone might love him and treat him right. He may try to push you away, because he doesn’t feel like he is worthy of your love, and he might even attempt to break up with you. This is where you have to put your foot down. Let him know it’s your decision, and then tell him he’s worth so much more than he realises.

He has problem with intimacy.

Sometimes he has a feeling that a sudden flood of emotions is too much for him.  He doesn’t know how to deal with it or how to process it because he’s not used to letting it happen to himself. The truth is that he wants to share his feelings but he doesn’t know how. He probably believes that the moment he shares his emotions, you won’t want him anymore. If this is the case, let him know that you want him, all the good parts and the bad. Even though this emotionally broken man loves differently, you don’t care. All you want is for him to accept your love in return. 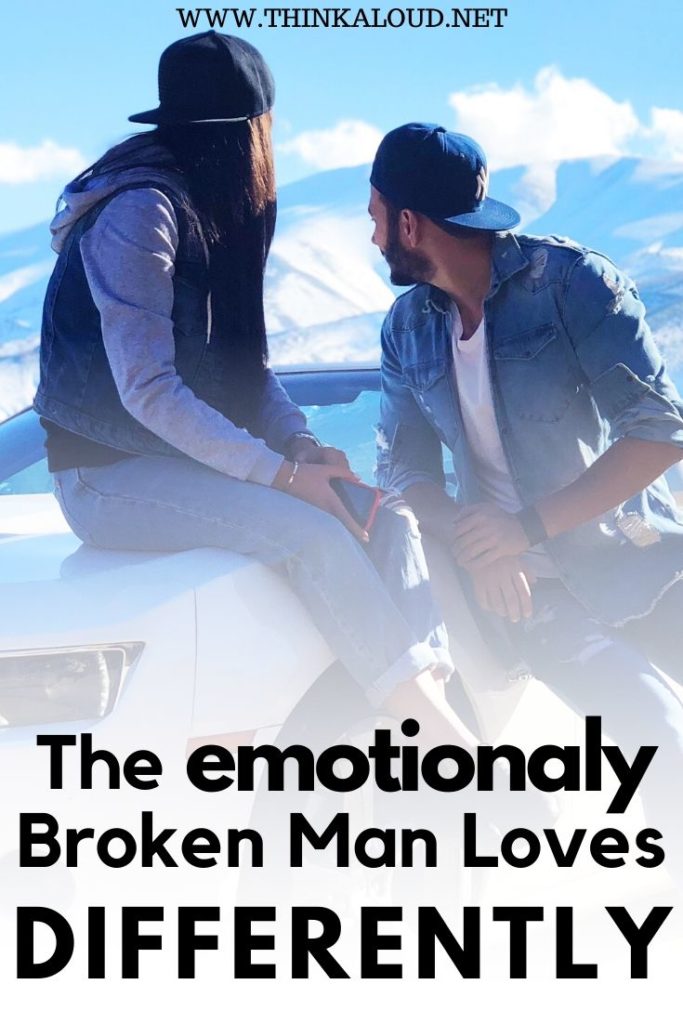